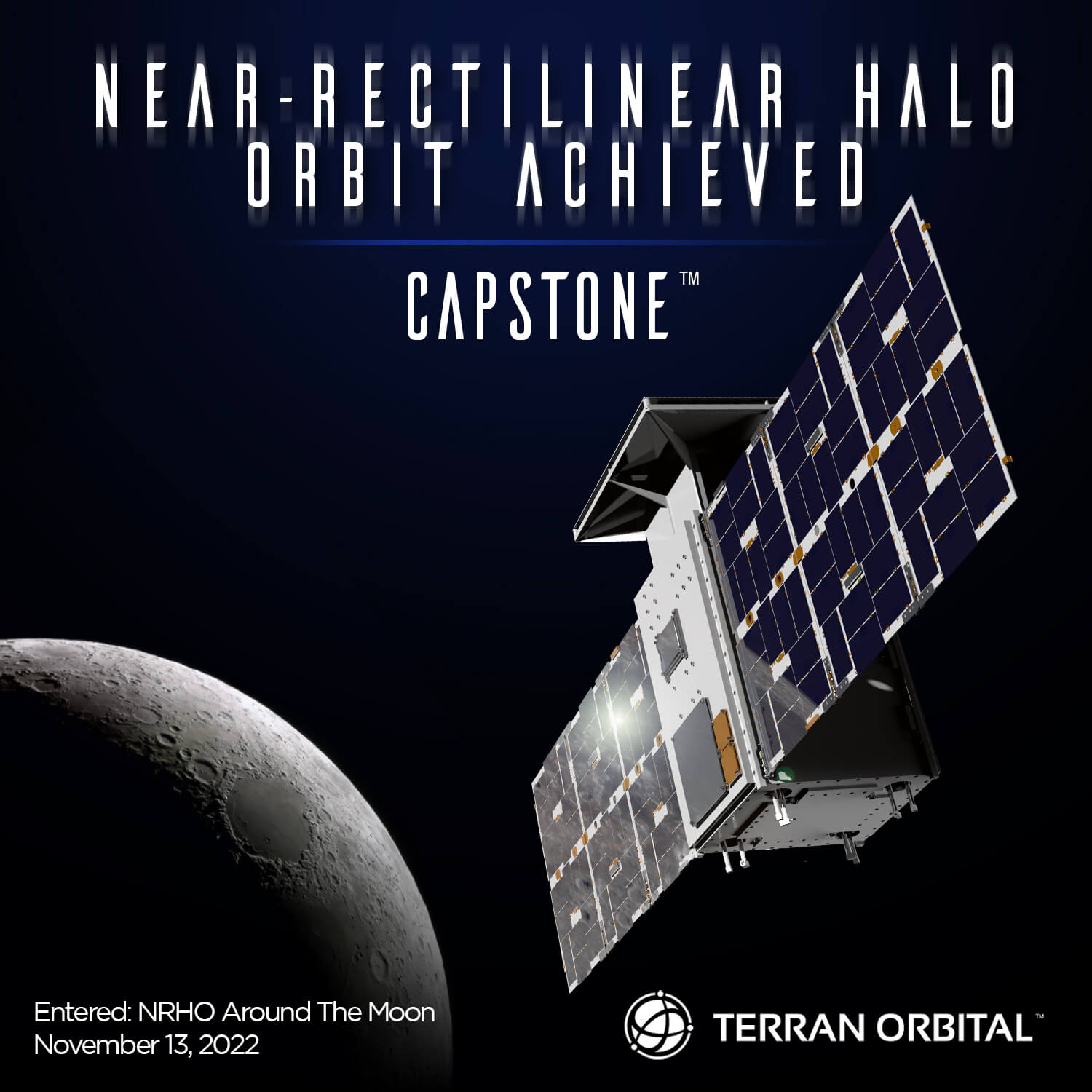 BOCA RATON, Fla., Nov. 14, 2022 – Terran Orbital Corporation (NYSE: LLAP), a global leader in satellite-based solutions primarily serving the aerospace and defense industries, today announced the Terran Orbital-developed CAPSTONE spacecraft successfully arrived in a Near-Rectilinear Halo Orbit (NRHO) around the Moon on Nov. 13. Following an initial orbit insertion maneuver on Sunday, CAPSTONE will perform clean-up maneuvers over the next several days to complete insertion into its target orbit. The spacecraft’s arrival in this unique elongated orbit marks the next phase of its pathfinding lunar mission.

The CAPSTONE mission will lay the groundwork for future lunar exploration by proving the operations of robust missions in NRHO. CAPSTONE’s goal is to provide rapid and low-cost data about operations in NRHO around the Moon, the same orbit planned for Gateway – a space station that will orbit around the Moon to provide astronauts with access to the lunar surface in support of NASA’s Artemis missions.

Until now, this demonstration would be impossible for a 12U form factor such as CAPSTONE – but the compact, low power, and robust system design of Terran Orbital’s MRKII avionics enabled the creation of this 12U interplanetary platform. Once the CAPSTONE vehicle finalizes insertion into the NRHO orbit, the team will prepare to demonstrate the CAPS software, developed by Advanced Space, to demonstrate inter-satellite ranging with the goal of reducing ground station congestion with the expected increase in satellite activity around the Moon.

“To say we are proud of the CAPSTONE team is an understatement,” said Terran Orbital Co-Founder, Chairman, and Chief Executive Officer Marc Bell. “From Rocket Lab’s perfect launch to NRHO insertion, we had the privilege of never experiencing a dull moment. Terran Orbital engineers continuously met rapidly changing circumstances with precision and innovation bolstered by the advantages of in-house hardware and software development. The design, modeling, and simulation concepts refined throughout the process will ensure the successful flights of countless future generations of spacecraft. Terran Orbital is grateful for the trust, support, and collaboration of NASA, Advanced Space, and Rocket Lab, and we look forward to fostering these partnerships in imminent collaborations.”

“Guiding CAPSTONE to the Moon was a once-in-a-lifetime experience none of us will ever forget,” continued Bell. “We cannot wait for the next Terran Orbital-developed Artemis-supporting satellite – LunIR – to launch. With CAPSTONE, we created a new map TO the Moon. With LunIR we will create a new map OF the Moon. It doesn’t get much cooler than that.”

“This combined CAPSTONE mission team, including Advanced Space, Terran Orbital, NASA and others, has demonstrated an entirely new approach to supporting space exploration,” said Advanced Space Chief Executive Officer and CAPSTONE Principal Investigator Bradley Cheetham. “This is a major milestone not just for our organizations but for our industry.”